Hello loyal readers and eager first-timers! Welcome to the final instalment of our ongoing series on the menswear looks of Archer, the smash animated spy comedy from FX. This week, we’re running down (really!) the styles of a whole lineup of minor recurring characters. Brace yourselves, there’s a lot to take in.

Barry Dylan: When we first meet ODIN’s top agent Barry Dylan he’s wearing a black, slim cut, one-button suit, with slightly wider than usual notched lapels, a black silk tie, silver tie bar, and black glossy loafers. His white, French-cuffed shirt is fastened with square cufflinks which appear to have onyx. It’s a high-contrast, high-status look. His suit being darker than Archer's gives him visual power over Archer (besides Archer being upside down in a wrecked car with his suit shredded, bleeding into the upholstery). He carries fancy, high status embossed business cards, and here’s a protip: good business cards will pay for themselves a thousand times over. Consider engraving or its cheaper cousin thermography, if you want to make a posh, expensive impression.

Post-cyborging, he wears a red track suit with white zipper down the front and white zips at the bottom of the pants (elastic, gathered), with red and white sneakers, and no shirt under the jacket. White ribbed tube socks. White sole on shoes, white laces, wide white stripe, narrow white stripe to mimic the Adidas stripes Steve Austin had but not get in legal trouble. Horizontal seam, topstitched, across the chest and arms at chest level to add visual width. Ribbed cuffs on the sleeves. Slanted, zippered hip pockets on the jacket, and three quarter sleeves, not full. Steve Austin's suit from The Three Million Dollar Man has full length sleeves which he pushes up sometimes, so Barry doesn’t get the look quite right. 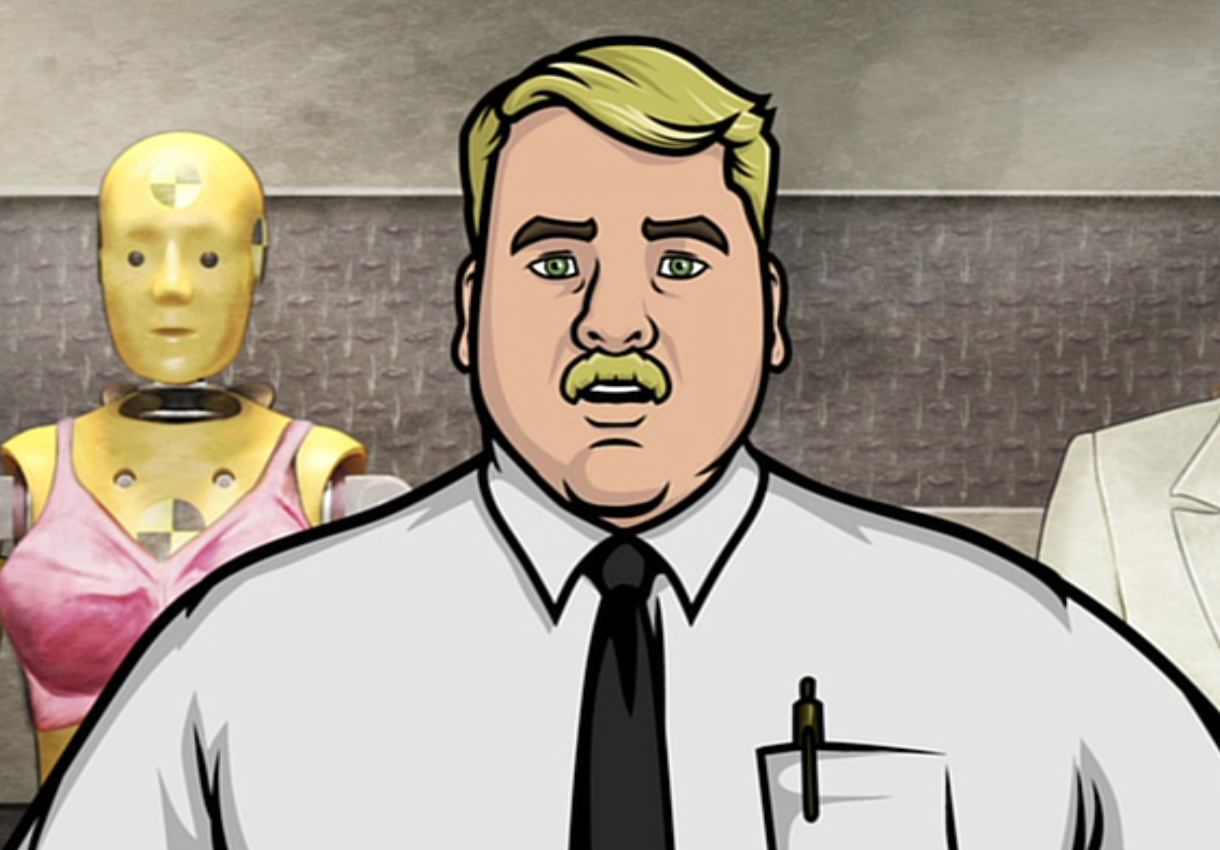 Bilbo:  In the first appearance for ISIS’ techie drone and hobbit aficionado, there are actually two identical Bilbos; they dress exactly alike, however, so it doesn’t matter that we can’t tell them apart. As befits a sysop worker bee, Bilbo wears a short-sleeved business shirt with pens in the breast pocket, and throttled with a black tie that is significantly too short. His pants are double-pleated and thus unfashionable, although they do allow a heavy man more comfort and a smoother look overall. He wears the Mountie Moustache so common to ISIS support staff.

That shirt: Never, ever do this, people, even if you are a sysop worker bee. Studies indicate that it is universally regarded as a low-status look, a working class man trying to pass for executive. This is not what you want. You want a long-sleeved shirt in any instance where you will be wearing a tie. NOT NEGOTIABLE. Poor Bilbo, it’s not surprising Malory slapped him into a fatal infarction. A snob like her probably didn’t even register him as human.

Brett Bunsen: The bullet-ridden-est member of the ISIS team favours a navy blue Brooks Brothers cut suit, two vents and cut rather loose, accessorized with black loafers, look of disgust, olive tie, and white shirt. In Dial M for Mother he wore a grey single-button, double vented suit with flap pockets, narrow notch collar, British spread collar shirt (yay! We love this look) and brown tie, cowlick, and an ugly but necessary orthopedic cane in aluminum with rubber grip.  Suit is loose and maybe a bit wrinkled. We dispute his pairing of a skinny tie with a British spread collar; that frame needs something to fill it. But otherwise, other than the bloodstains, we like Brett’s preppy, low-key look. And the cowlick is adorbs.

Burt Reynolds: Burt Reynolds is The Man, and if there were any question about that, The Look would clear it up immediately. Unlike regular mortals, Burt wears a triple-vented single-button black jacket, because he's just THAT awesome. It has a notched collar and narrow lapels, making him look taller. He accessorizes with a grey pocket square and grey turtleneck, black slim belt with plain, slim buckle.

For formal wear he sports a white shawl collared tux jacket with black vest, black pocket square, non-butterfly tie, and onyx studs in plain white shirt. Have you noticed the older men on Archer tend to wear suit vests? We have, and we like it.

Conway Stern: A diversity double whammy and a double agent besides, Conway Stern has a look as distinctive as it is attractive. Normally we’d say only Pierre Trudeau could pull off the turtleneck-and-suit look, but Stern makes it work. He sports a mid-grey notch-collared suit, cut to show off his wide shoulders and narrow hips, a dark grey belt with silver rectangle buckle, and turtleneck accented by a silver Star of David pendant on silver snake chain. Daringly, he sports a pocket square not flat, but poufed up. Only a man as macho as Stern could make it all work.

For the tropics, Stern sets off his skin tone with a pale pink guyabera with fancy stitching, white jeans, and white tasseled  loafers. No wonder everyone swoons for this dirty double-dealer!