Home / The Suit Experts: Articles on Luxury Menswear / Archer-Style: The Menswear of the Minor Characters, from Kreiger to Woodhouse!

Ready for our final installment on the menswear looks of the characters from the outrageous animated series Archer? Tighten your belts, pull up your socks, roll up your sleeves (because you would never, never wear a short sleeved dress shirt) and let’s get to it.

Nikolai Jakov is Malory’s main man (at least until Barry blows him to smithereens) and for most of the time this military man sports a double breasted military green uniform with epaulettes, peaked collar, green shirt and tie, with the traditional brass buttons, chest full of medals, and dingleberry clusters in gold on the collar. Being a two-star general he wears two stars on his epaulettes, and a bushy, Soviet-era moustache. The uniform is highlighted in blue piping and his suit pockets have flaps. All designed to make him look even plumper than he is. Making his escape from Russia and from fashion oblivion he sports an oxblood v-necked cardigan, very Mister Rogers, with two patch pockets, awhite shirt, taupe pants, and shiny black oxfords. Getting drunk with Archer after the escape, they are both wearing wife beaters. Jakov has a cheaper belt, though. It’s tragic to die in a cheap belt.

Algernop Kreiger, the uncertainly-credentials possible clone of maybe? we want to say … Hitler? is, like all scientists, somewhat constrained in his business attire. Dealing with sterile laboratory conditions and nasty spills of plutonium, blood, and less speakable substances means the good (?) doctor sports a classic white lab coat instead of a suit jacket. In keeping with his taste for ‘70’s prog rock, he favours a mishmash of earth tones, generally sticking to brown flared pants, a greenish yellow shirt, and a wide brown tie with square-toed, possibly Earth Shoes. When he’s not in scrubs or his 70’s scientist mode, his command of tertiary colours is put to good use with some daring combinations which work surprisingly well on him: consider his cream shirt, teal ascot, and plum jacket in Palace Intrigue. Not something everyone could pull off. Speaking of which, when working on his extracurricular projects, Kreiger prefers to go skyclad. I’m sure some workplace safety organization will have words to say about that! 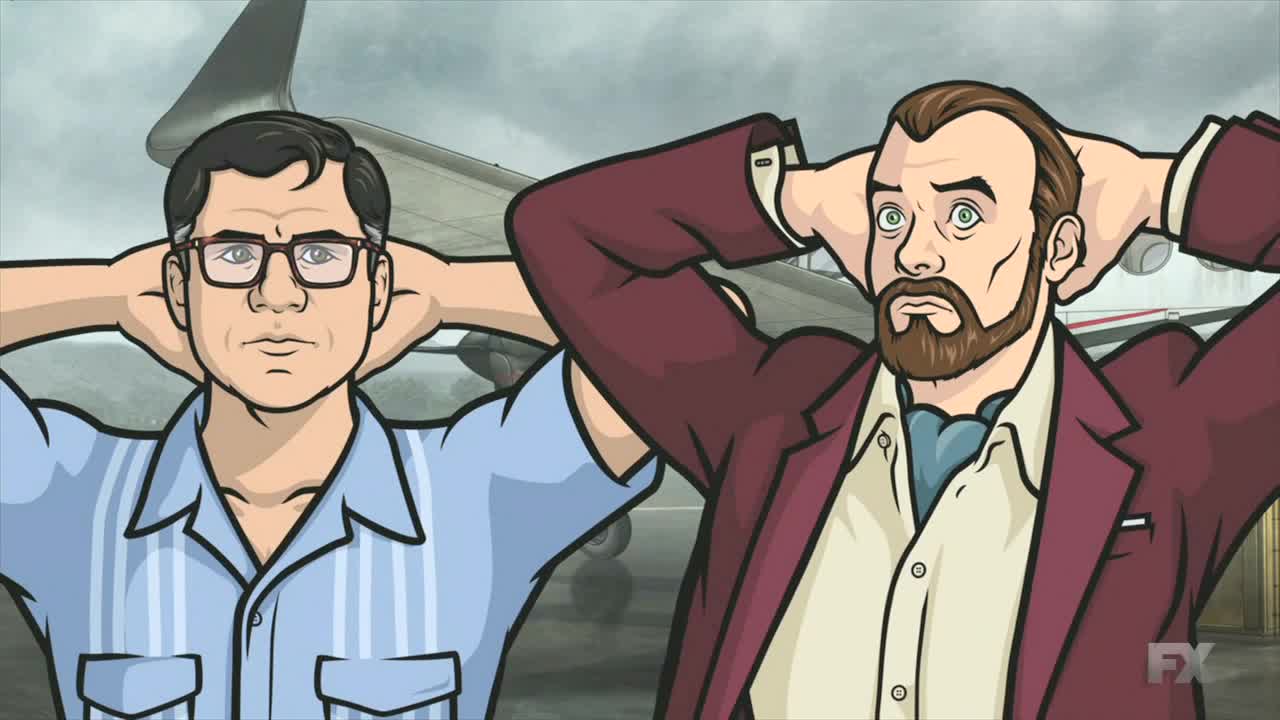 Mannfred the German spy  is one of our favourite characters. He’s just so tragicomic! But his wardrobe is pure drama. When we first meet him he’s undercover as a chef, wearing an olive green tee, chef's double breasted jacket, grey pants, and brown leather harness for abseiling down the side of luxury apartment buildings on the Upper East Side. In Dial M for Mother he's got a black turtleneck, a loose, pale grey two-button jacket with horizontal slash pockets, breast pocket with no square, three button cuffs instead of the usual four, and black pants. Very dashing, and an unusual choice not everyone could pull off. For whatever reason, we think the ponytail works with a turtleneck and jacket; it’s very Belgian Graphic Designer if you know what we mean.

When it comes to ISIS rival ODIN’s agents, it’s not Archer being paranoid, they really ARE stealing his looks. When we first see the ODIN agents in the field, they are wearing black tactileneck turtlenecks, causing Archer to whine about being copied, along with slim black tailored pants and unpractical tasseled loafers. The next time we see them, in Season Two, they have adopted Archer’s cargo pants and combat boots as well as his tactileneck. For shame, ODIN!

Malory’s romantic fallback and longtime competitor Len Trexler flaunts a high-contrast, high-status look that says, better than any bank statement, that this is a man of substance. He wears a dark grey three piece suit, accessorized with a power tie in maroon, pocket square, black belt, and trim moustache. His shirt is short in the collar, and his suit is slightly wide in the lapels. Sometimes he mixes it up with a lighter grey vest with slant pockets and no pocket flaps, which is a good choice for a heavyset man. His polo outfit is a polo shirt in olive with a diagonal white stripe, and white breeches with rather daring oxblood saddle and bridle on a strawberry roan polo pony.

Archer’s longsuffering butler/substitute parent Woodhouse knows what a butler should wear. Eschewing the outdated code of frock coats, dinner jackets and the like, he wears a practical, impeccably tailored longsleeved white shirt, usually with button cuffs so the sleeves can easily be turned up, except in Drift Problem he has French cuffs. Musta been payday or something. His shirts have one breast pocket, a fairly tall rise in the collar that is useful to hide an aging neck, and are worn with a black or dark grey tie, white half apron, black or dark grey trousers, black shoes. On date night with Carina he wears a black notch collared suit with breast pocket, three buttons, five button grey-blue waistcoat, matching tie, and white shirt. In Miami the two AGENTS get him a guyabera in pink with white, and a shell necklace, accessorizing the look with some retro shades and white jeans. He wears a similar look in the flashback where he’s doing heroin with William Burroughs. White undershirt he strips down to when the 'ants' get to him. Boxer briefs. Often grey pants and grey tie with black belt. Two horizontal slash pockets on the back. Perfect fit, of course. A good butler is a master of tailoring.